After a busy couple of months with various events this months meeting will be social only with a quiz with prizes and possibly a film as well with the chance also to have a good chat with other members.

Not forgetting also that there is a karting trip this week as well.

What a strange world this is, last year we had the best weather ever for the Flatters, this year it was a monsoon! The marshals were the heroes of the day standing out in persistent sideways Epynt rain, wetter than any normal type of rain. Saturday had been glorious but the Met Office had promised us a wet Sunday and duly delivered as the heavens opened at 6:30 in the morning. In the cold light of day the rally was very successful and the 5 stage format used this year proved to be extremely popular with competitors. Spectator numbers were down but with extra scrutiny from the MSA this was no bad thing.

The rally was once again two events, National A historic and National B modern but had to be seeded together in order of anticipated performance which made things more than a little interesting when it came to working out the order. Damian Cole was top seed in his new Ford Fiesta WRC with Jack Morton on the notes but intercom trouble foiled their attempt to be fastest on stage one, that honour going to Mark Jones and Terry Martin in their very well driven BMW starting as they meant to go on. Cole took the initiative thereafter but Jones kept the pressure on all day to finish an amazing second overall. BMC member Eian Pritchard belied his lack of seat time to record an excellent third overall in the North Road Garage Ford Focus WRC.

In the National A historic rally there was a lot of BMC interest locally and main contender for top honours was Jason Pritchard with Phil Clarke in their Ford Escort RS1800. They didn't disappoint either with a commanding victory over experienced campaigner Melvyn Evans in a similar car. Pritchard's victory now puts him at the top of the points table in the British Historic Rally Championship. In the B3 class keen rivals Bob Gibbons and Malcolm Rich were fired up for a good battle. Gibbons co-driven by son Dale in their Cortina and Rich co-driven by Jon Hawkins in their Anglia are fighting for class honours in the British historic Championship and it was Gibbons who put his experience to good use to pull out a decent lead. Rich was destined for second place but with just a mile to go he passed Gibbons parked up on the side of the road with a broken driveshaft and was gifted a category win and bagging a large number of championship points.

Brecon Motor Club members worked hard to pull the event together and will be looking for extra help to keep it going for 2016, keen helpers are hard to come by in the Brecon area so if you are a keen person come and give us a hand! 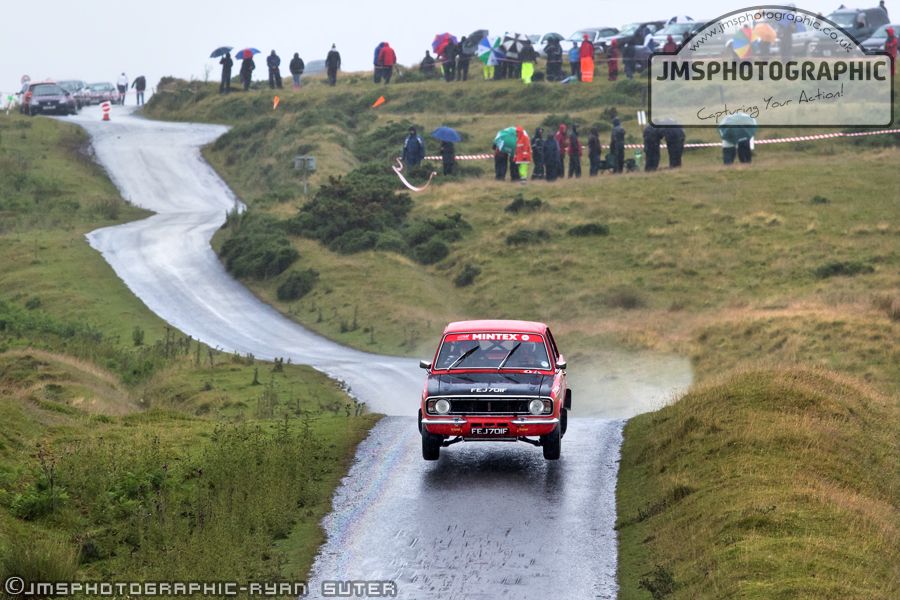 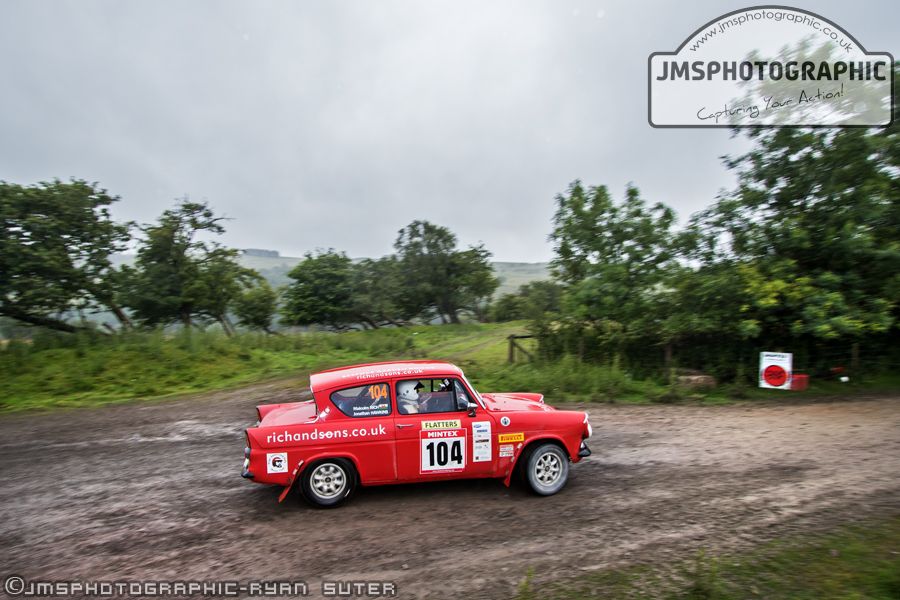 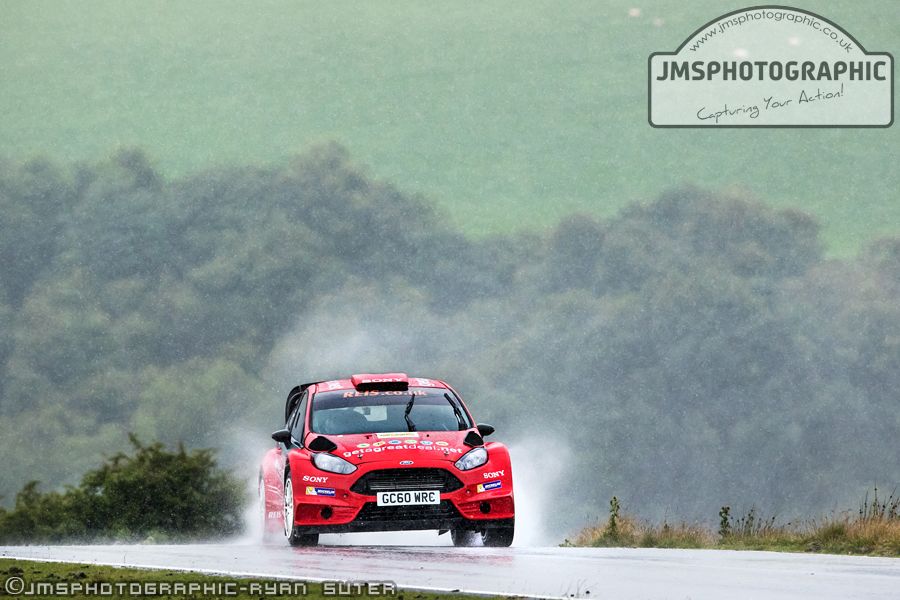 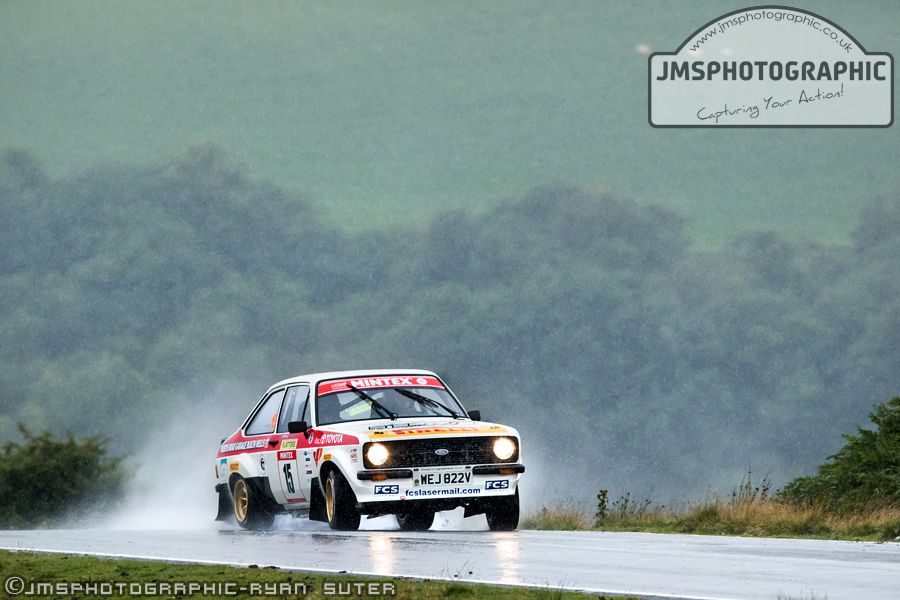 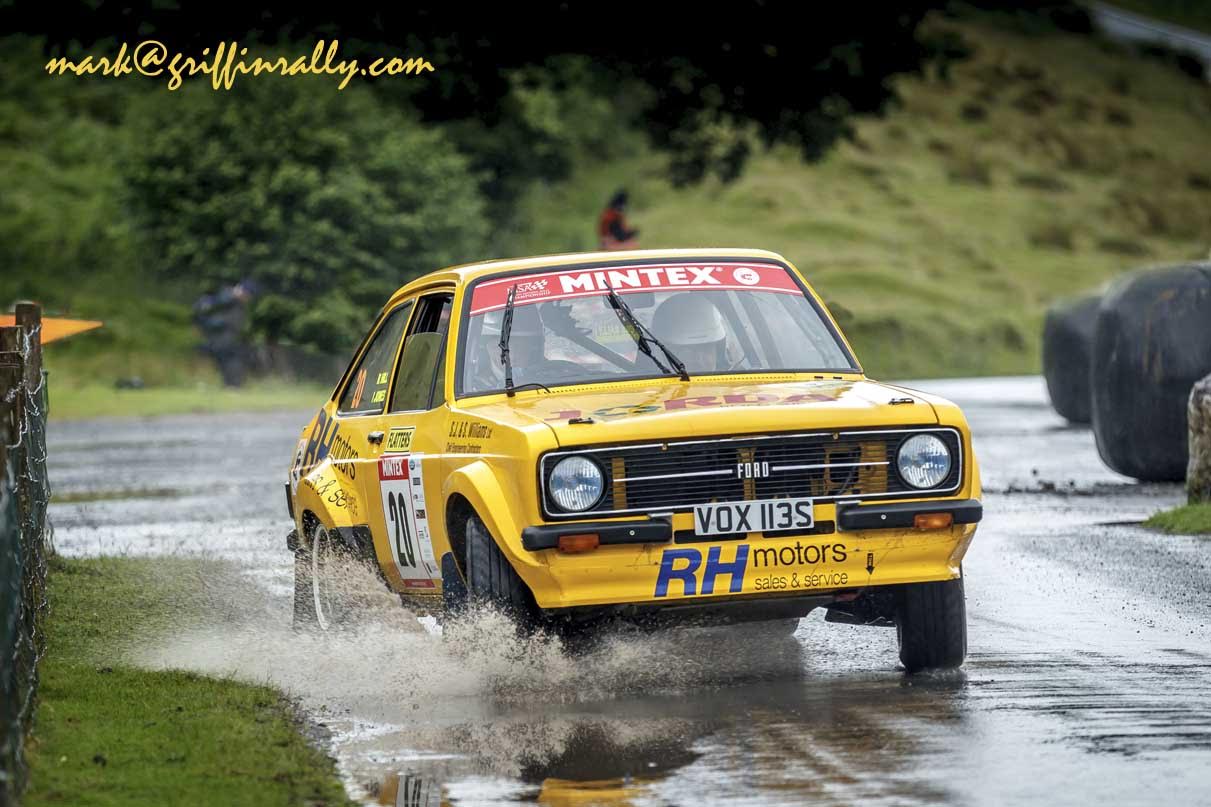 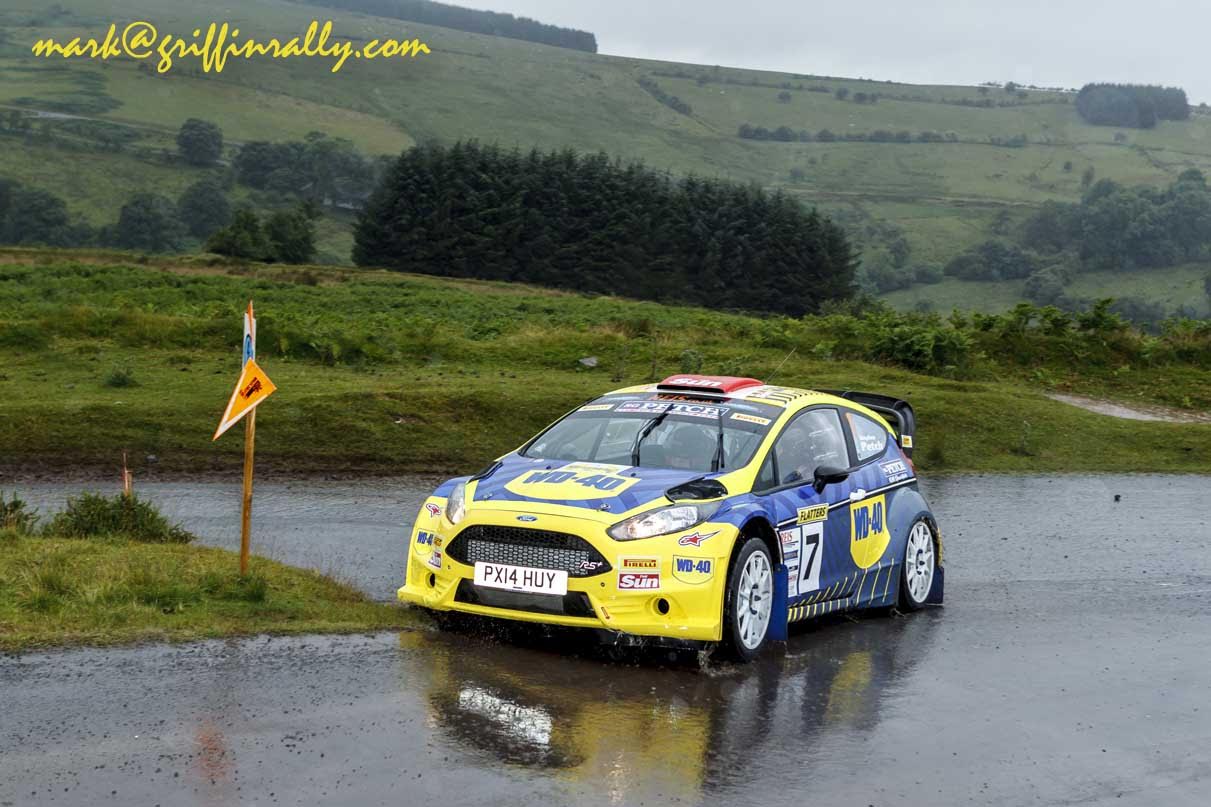 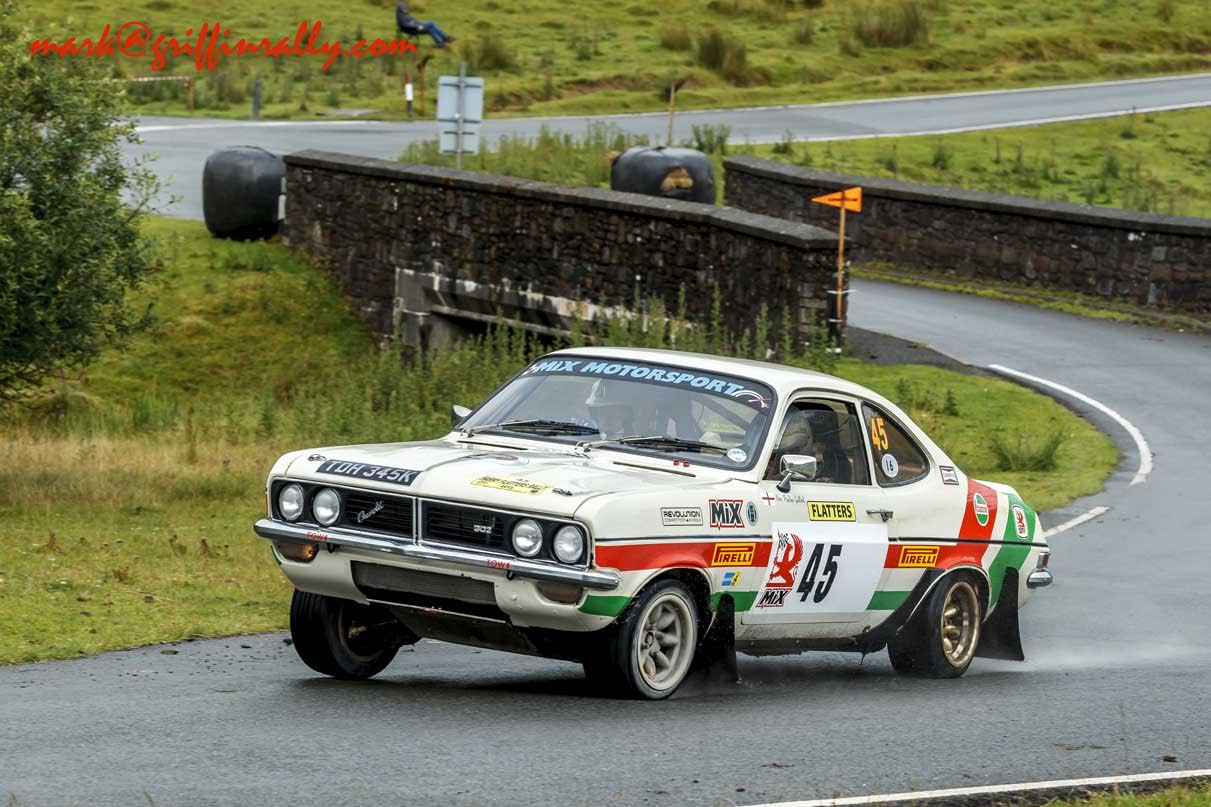 Well, after months of preparation and planning it eventually happened! Chris Phillips had a desire to run a classic tour and late last year a deal was clinched with the HRCR to be a part of their Classics by JSWL sponsored Classic Tour Series. Work began in January but promptly came to a halt as snow and ice in the lanes made the route survey a little too difficult. The road book compilation had its moments too as the trip meter in the ageing Renault Laguna didn't want to work to begin with - nothing to do with operator error of course.................Everything went well thereafter and once James Chappelle had put the detail in to legible form and Dave McIntyre had tested it on the ground we were good to go. Entries opened and Gethin Phillips did a great job of recording and acknowledging but sadly missed the big day after starting a new job the week before.

The big day did arrive and 47 cars lined up at the rugby club at Gwernyfed in less than ideal conditions. It was dry for days before but at 06:45 on the dot the heavens opened. Luckily it didn't last too long but it could have been better! The unlucky ones were Nigel Chappelle and Roger Simons who had the task of scrutineering in the open. For Chris the rain meant nothing as despite the bacon for the rolls cooking merrily away there were no rolls. After a tense few minutes the baker did arrive and calm was restored. Jane Phillips and Gethin's girlfriend Emma did a grand job of signing all the participants on and at 08:45 on the nail Chris delivered his brief to a spellbound audience. Well he said they were, I'm not so sure. With all that done and James and Lisa Chappelle on the road looking for unforeseen issues it was time to start. Club president Brian Dennis ably supported by Graham Richards flagged the cars away and a route taking in Llangorse Mountain, Crickhowell, Norton and Grosmont led to a refreshment stop at Eywas Harold village hall where we were done proud. From there the route headed into the Black Mountains and despite a bit of mist to begin with the weather improved and started opening up into a beautiful day.

Hay on Wye was the venue for the lunchtime rest halt where lunch was taken at the great selection of establishments the town has on offer. Unfortunately for the gentlemen who had brought their wives along it may have been a retail opportunity as well! The route went on for another forty or so miles after lunch towards Dorstone before visiting Paul Evans' passage control at Arthur's Stone and Dave Thomas' control on Begwyn's Bluff before another manned by Dave McIntyre at Brechfa Pool. A short hop going close to Llanfilo was the last section before a welcome buffet back at the rugby club where everyone received a slate coaster as a momento of the day.

We would like to give our thanks to all who participated, marshalled or helped in any way and also to Gwernyfed Rugby Club and the local residents for having us. Planning will now start for next year for what we hope will become a regular fixture on the classic tour calendar. 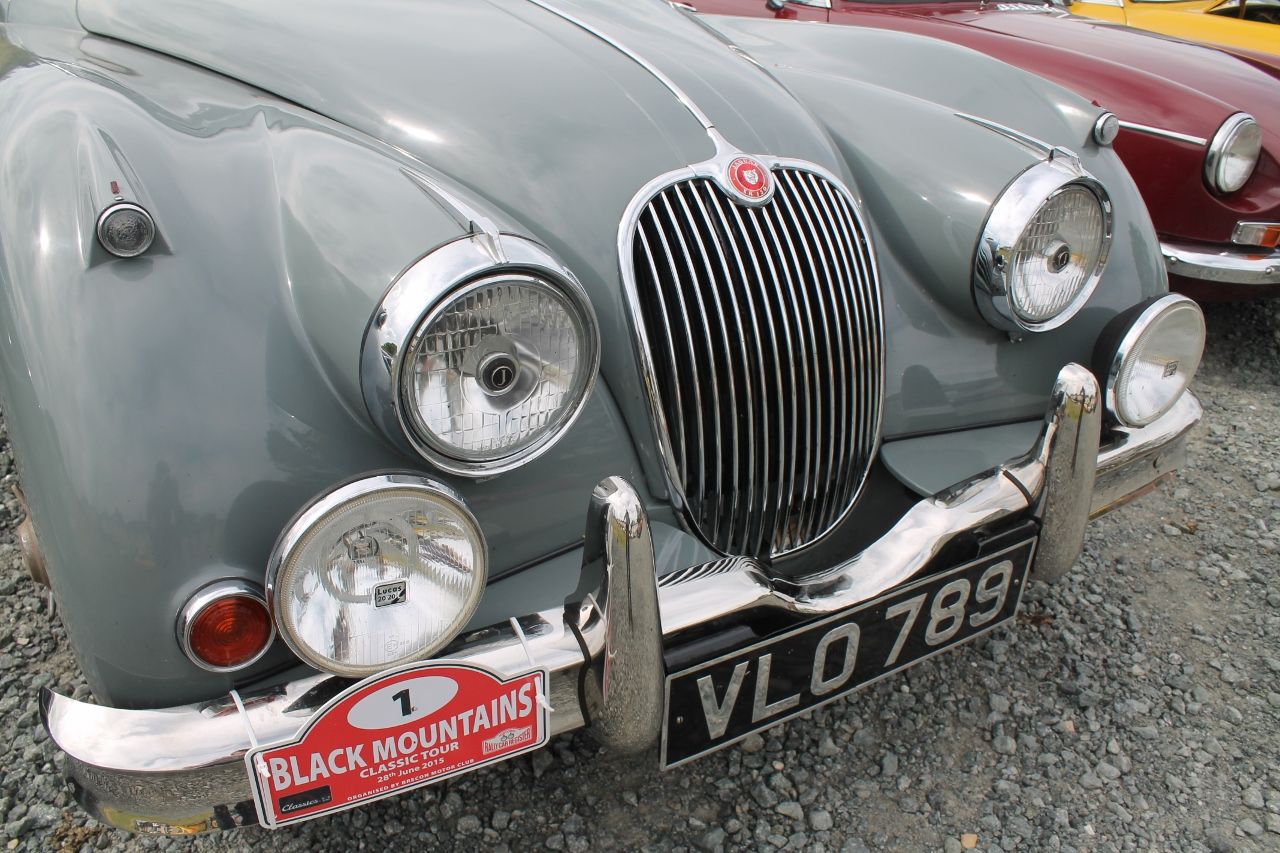 A fantastic car to have at Number 1 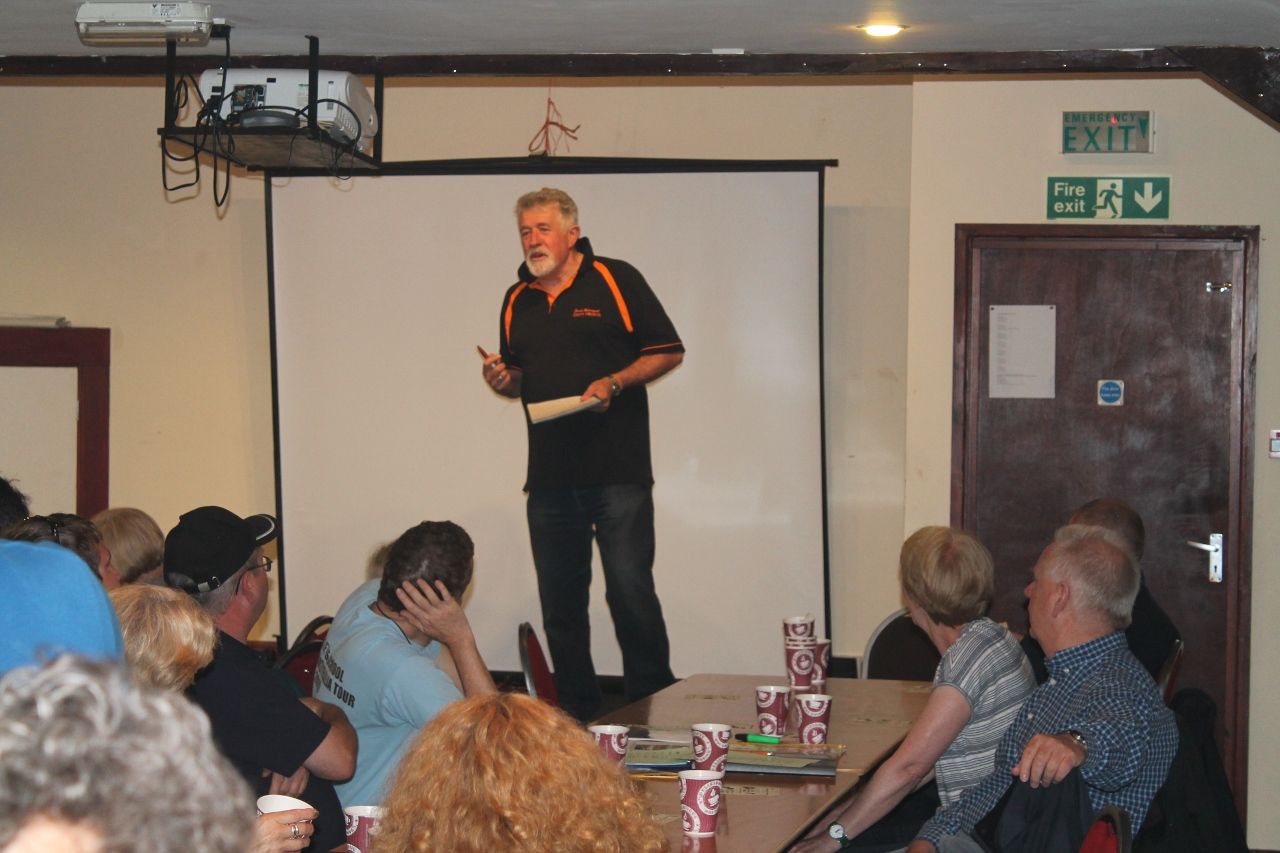 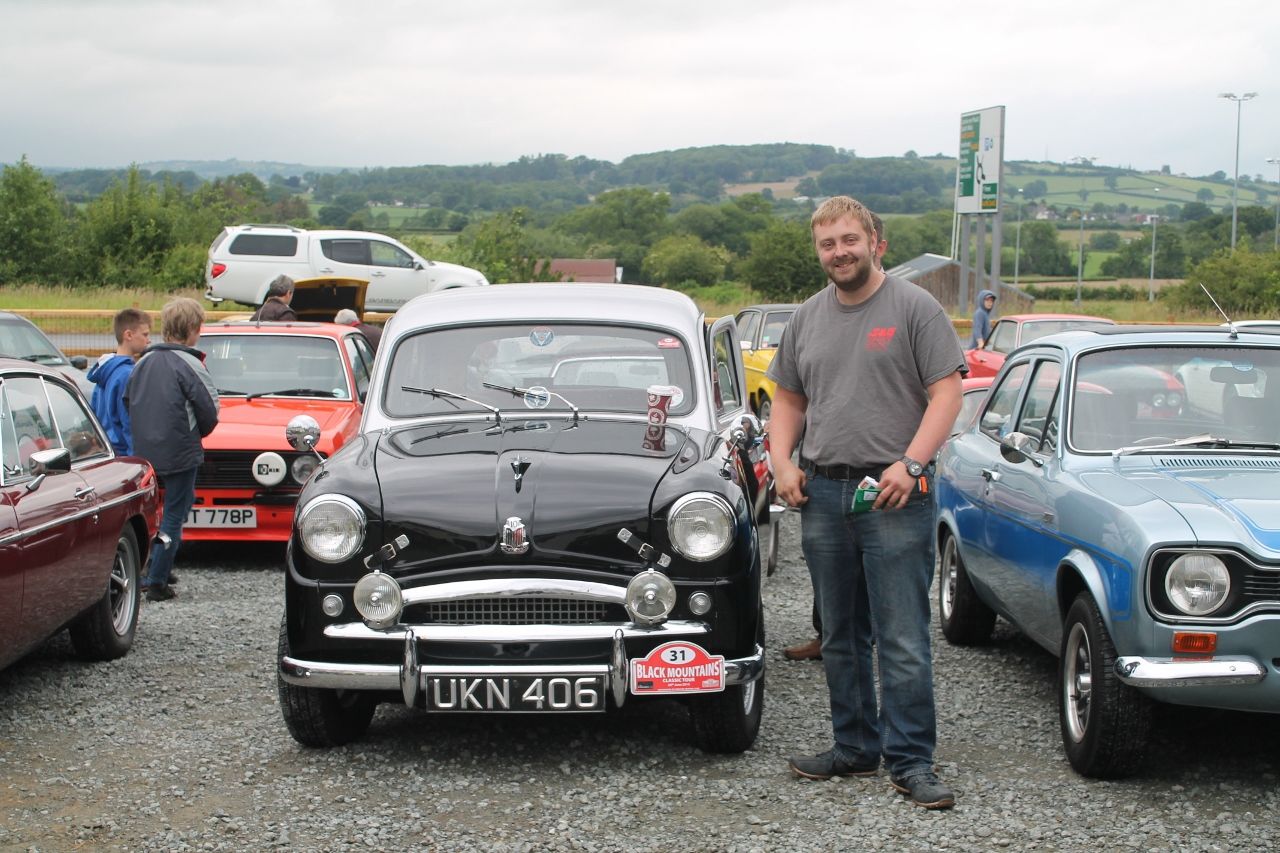 A selection at the finish 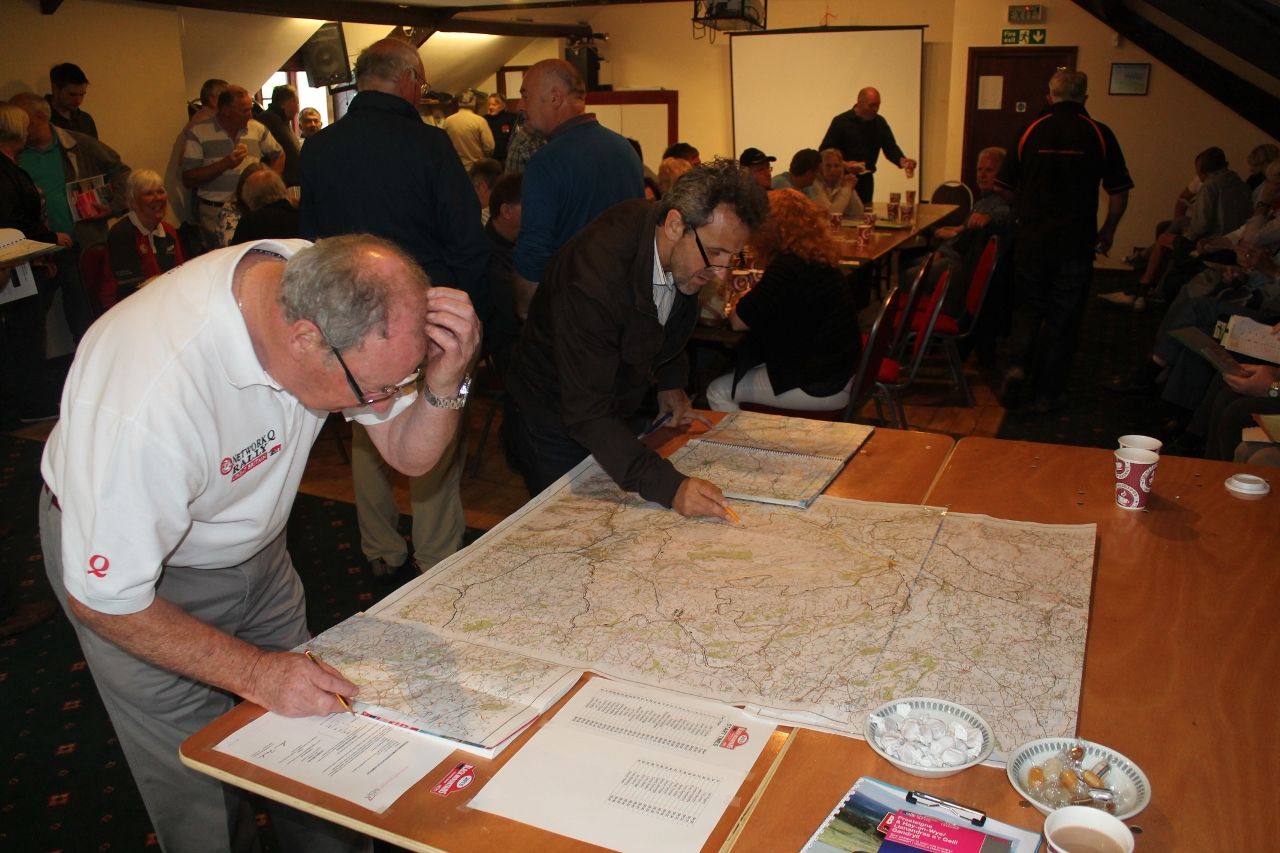 Julian & Henry Williams are flagged away by Brian Dennis 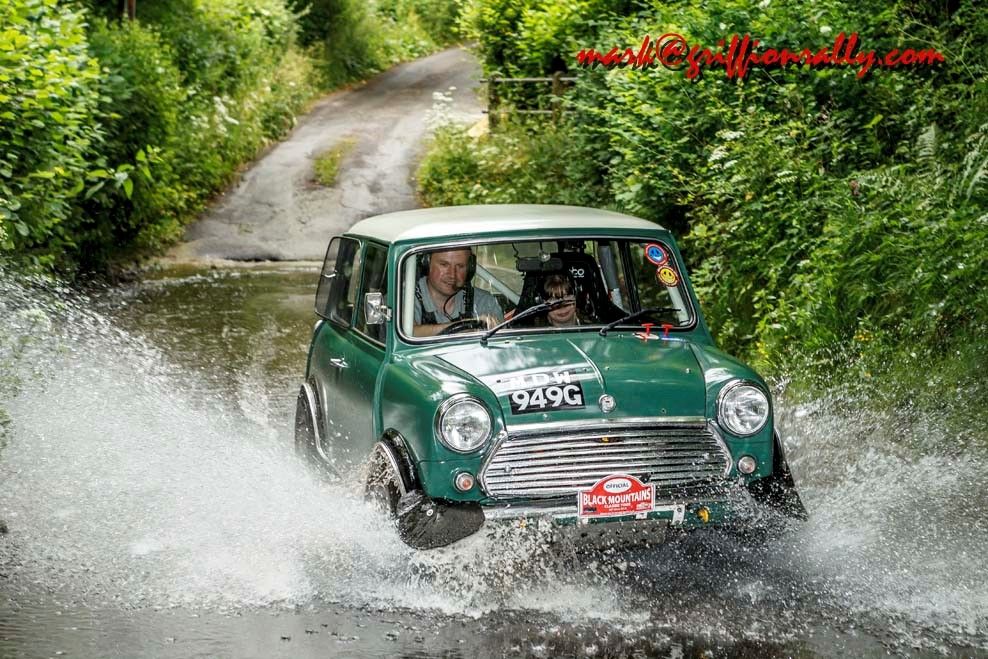 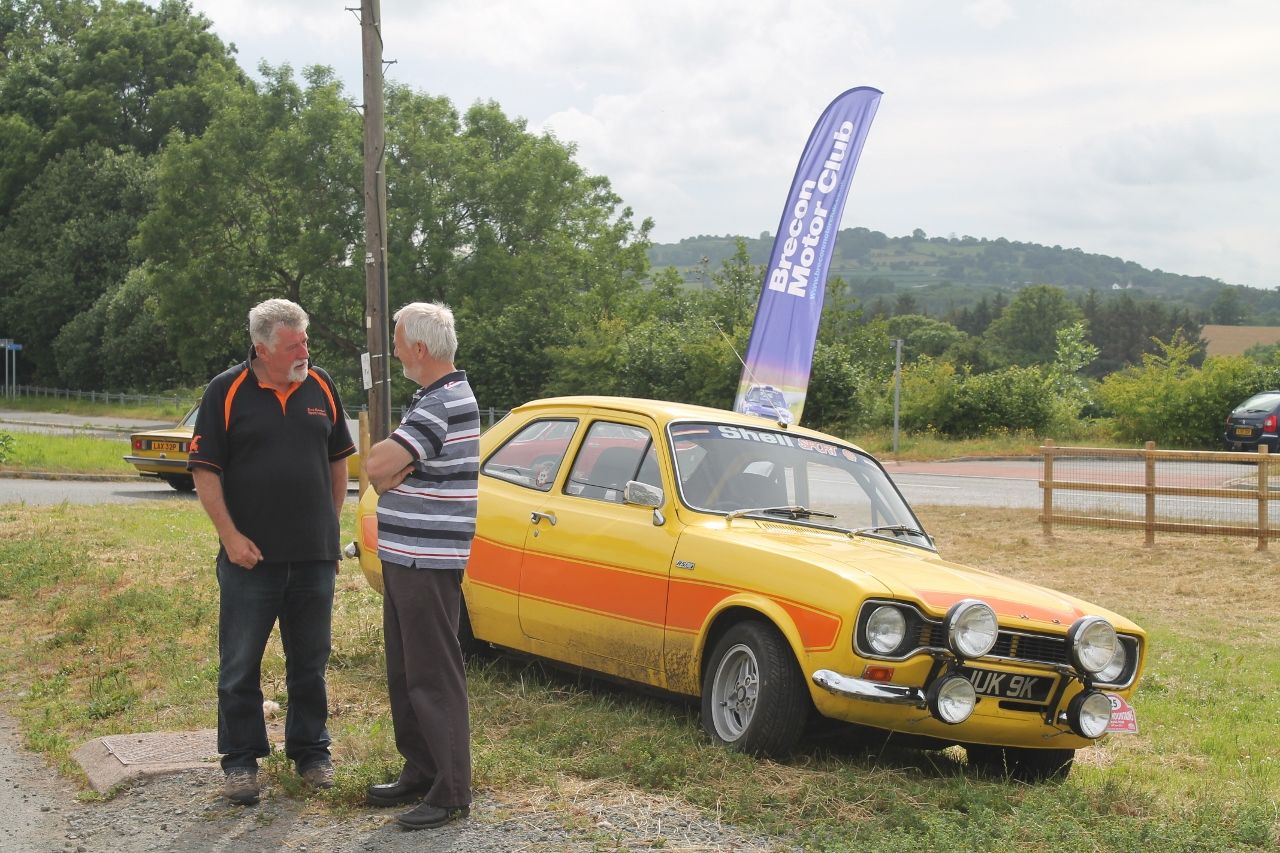 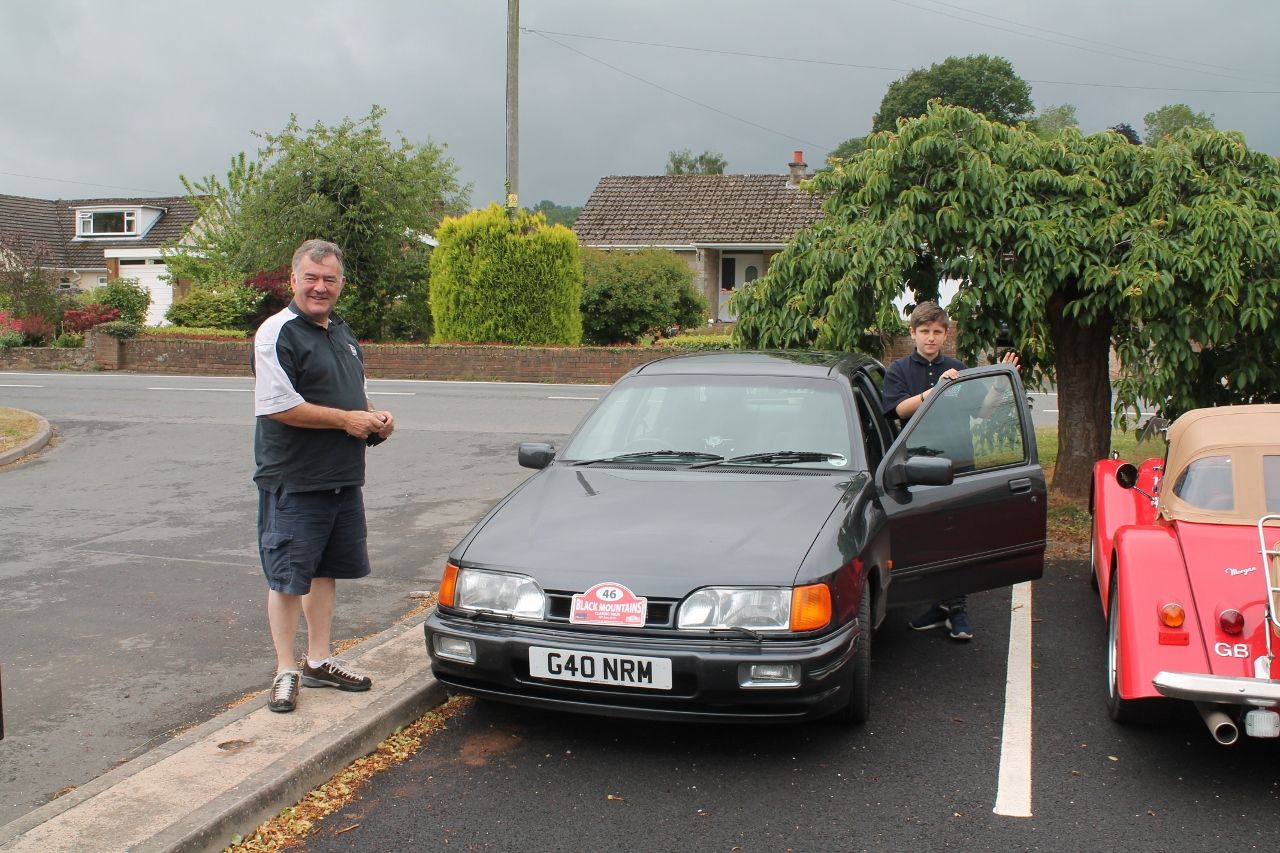 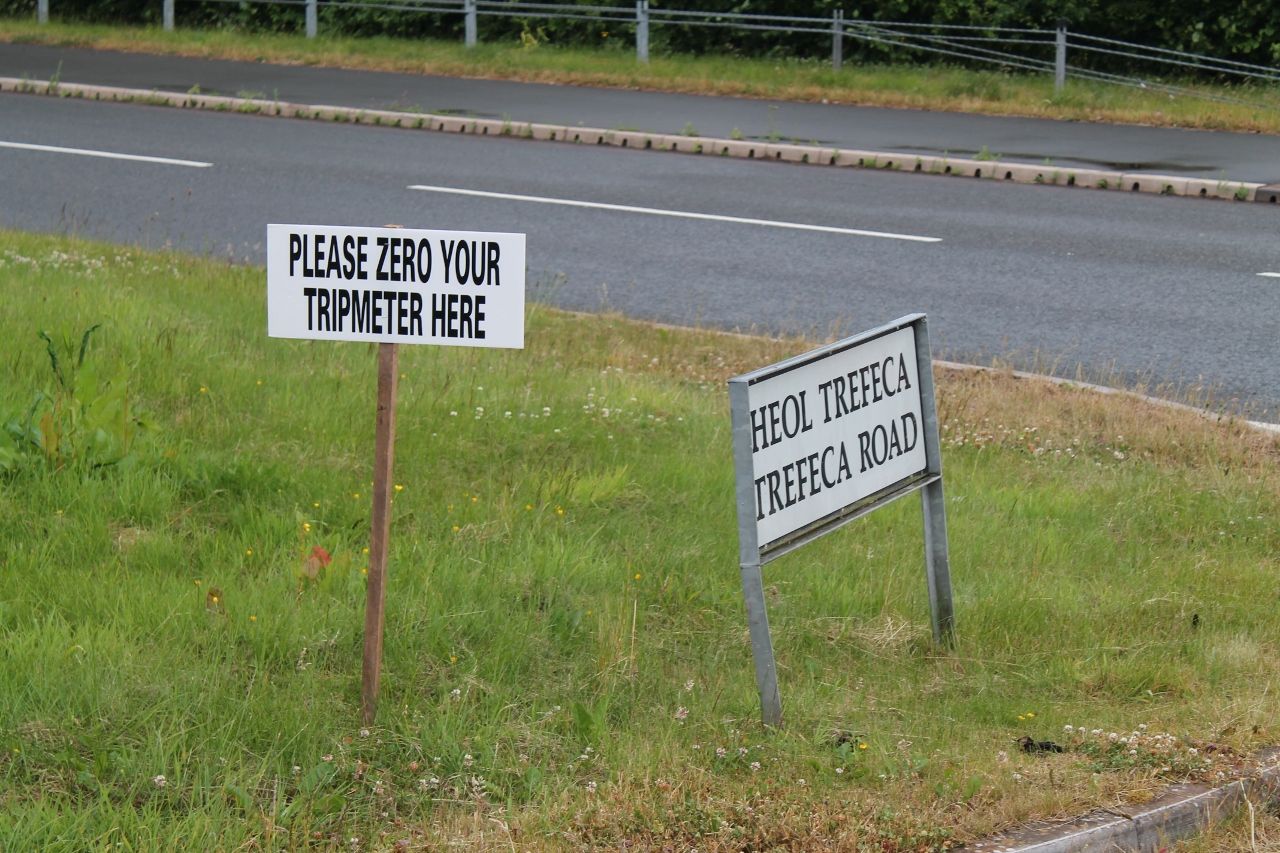 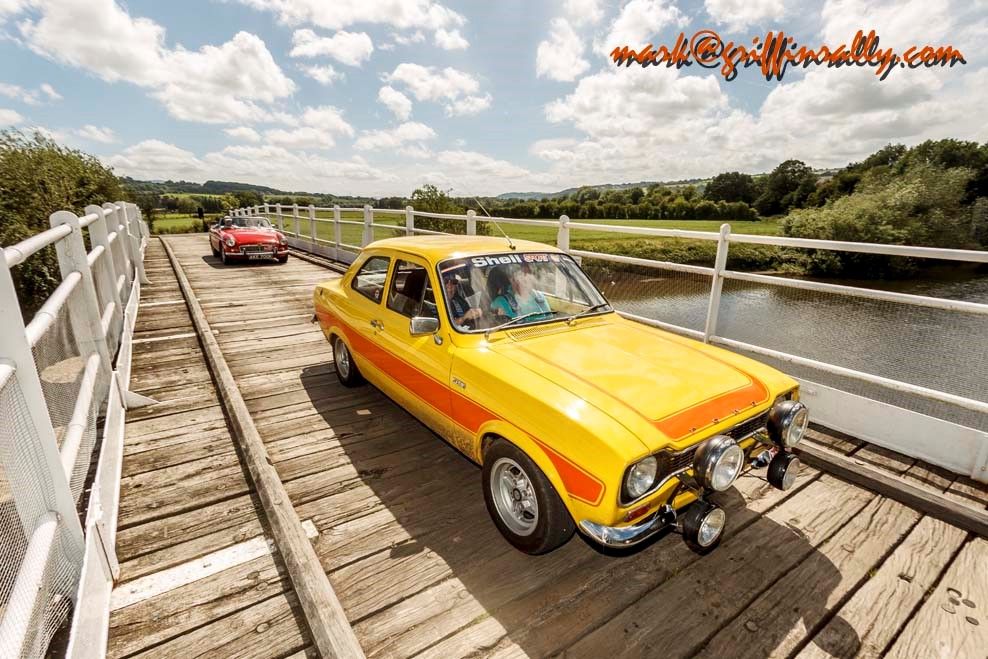 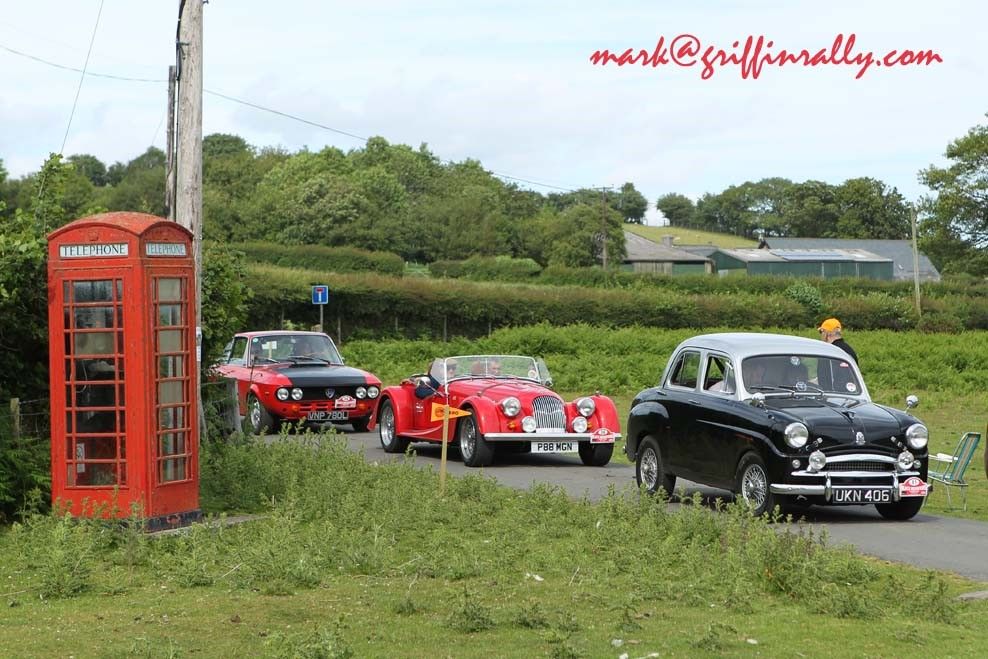 What a weekend! Heavy rain forecast for Saturday never really materialsed thank goodness and although it was wet it wasn't too bad at all. A thin entry on Day 1 didn't detract from a great days sport and everyone enjoyed themselves. Shaun Elwell took FTD in his Lotus 7 while Simon Rogers who was expected to do well sat it out with no wet weather tyres available. The marshals were hero's, we couldn't run without these people and their time is much appreciated.

Sunday dawned dry and bright and a much larger entry enjoyed ideal conditions. FTD went to Simon Rogers but he didn't manage to break his hill record but managed to equal it exactly! Thanks again to all the hill, paddock and start marshals, a sterling job done by all. The club had a couple of competitors out, James & Lisa Chappelle both had a go in their Mini on Sunday and James won the class. Lisa had taken the award on Saturday so hopefully there won't be any arguments in that household with an award each!

Events sponsors Brian & Tim Dennis were fully competitive and both won their classes on Saturday despite Brian failing to finish his second run with fuel pump failure. Tim won again on Sunday and Sam Davies aired Brian's Citroen C2 and narrowly missed out on a class win against much more powerful opposition. Part of the event sponsorship is provision of a breakdown truck and thanks must go to Viv Joy and his grandson for their time and enthusiasm.

Time to think about the classic tour now and then the big event, the Flatters before we get ready for classic show on August 2nd. Phew! 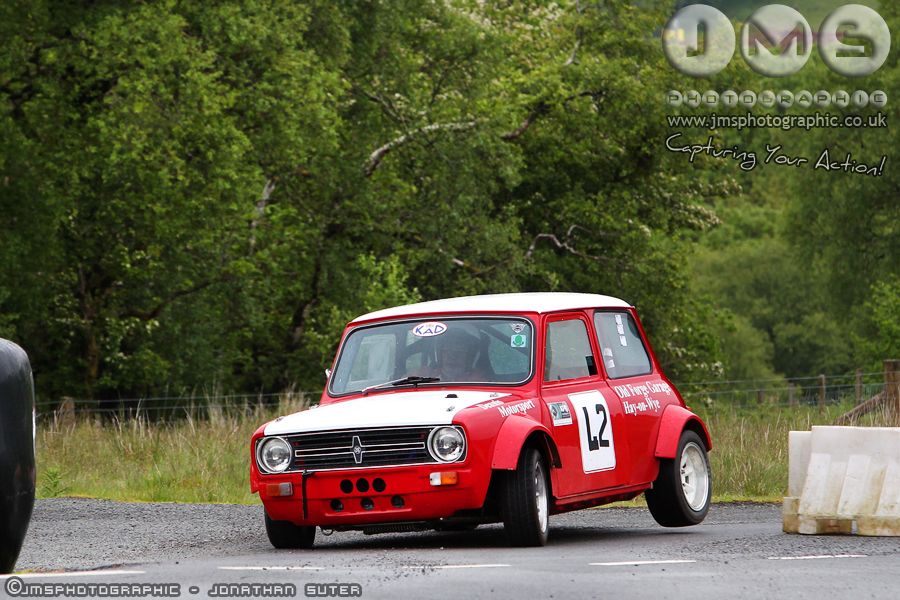 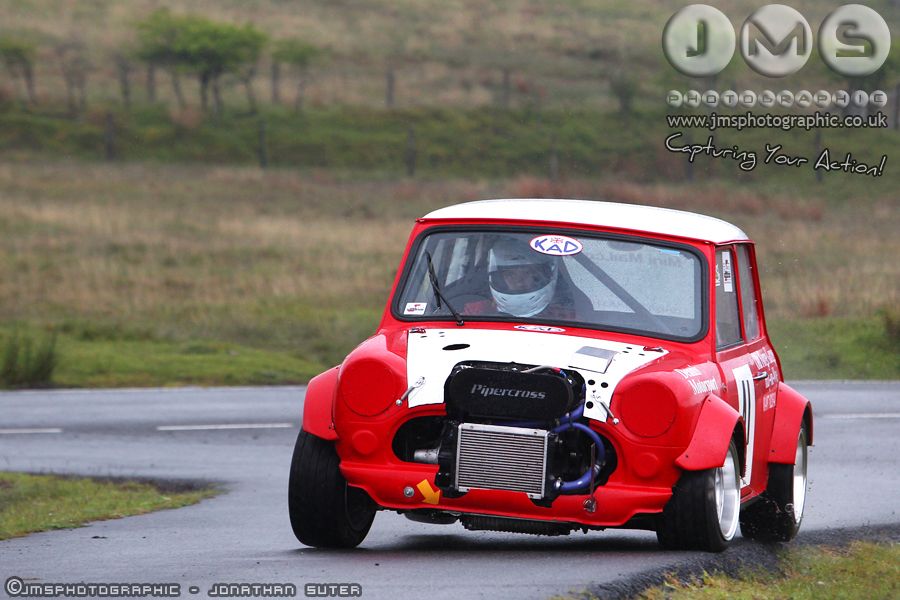 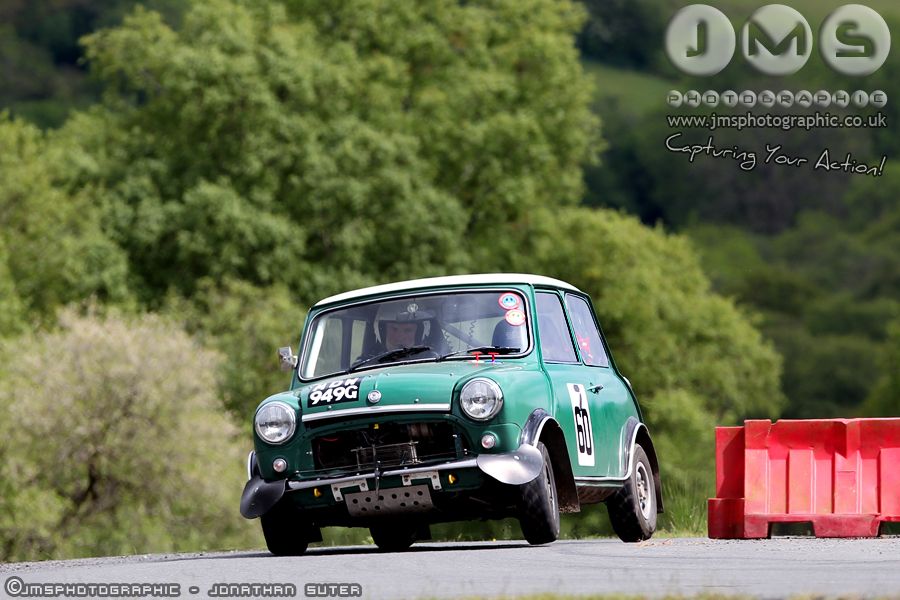 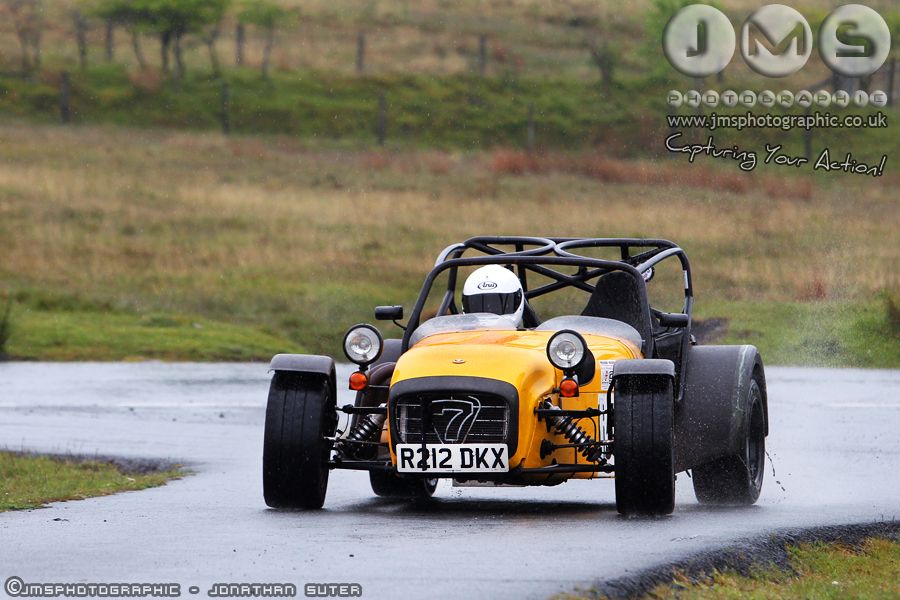 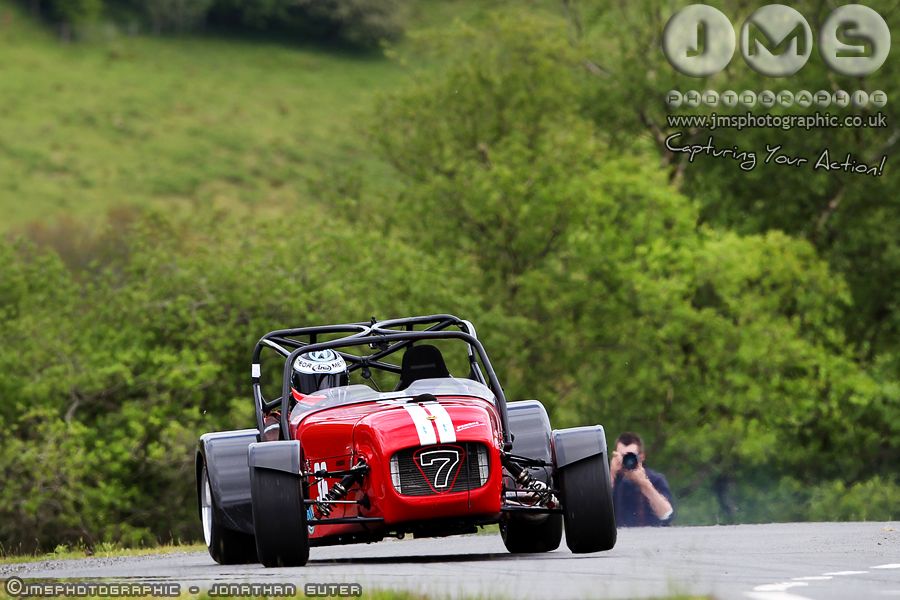 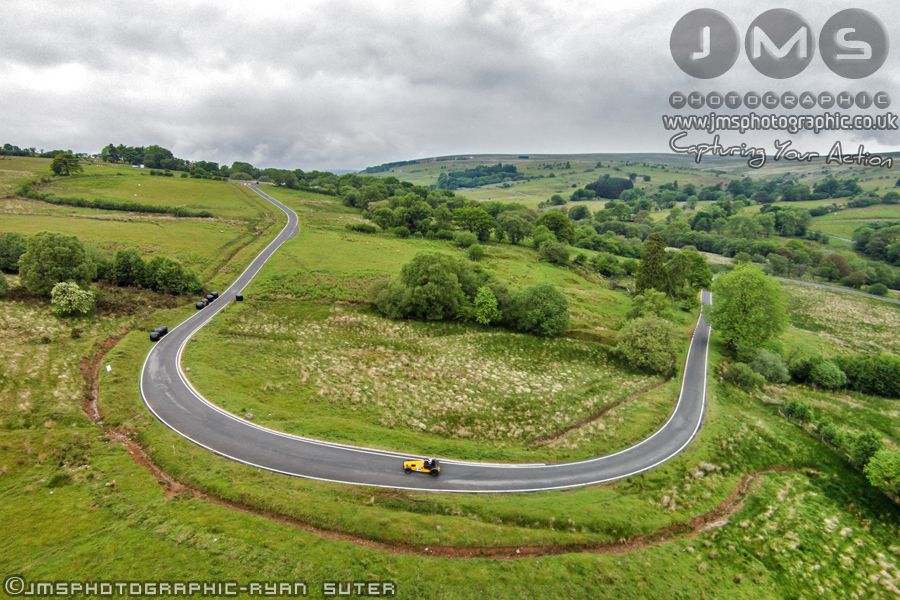 HILLCLIMBS - THIS WEEKEND! COME AND HELP.

It's the Dennis Motorsport Epynt Hillclimbs this weekend, June 13th & 14th. We would really appreciate any help from members or non members. Contact Bob Long if you can or just turn up! 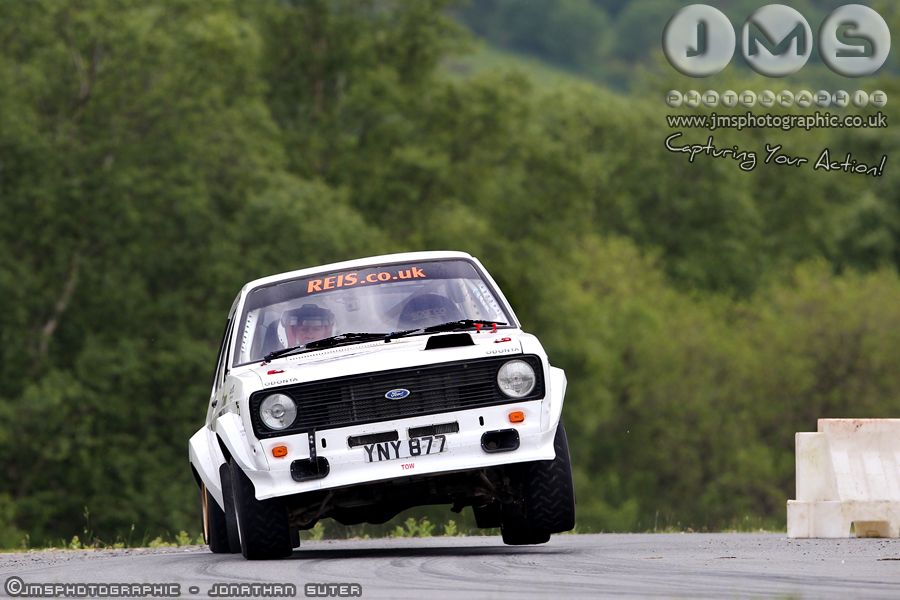